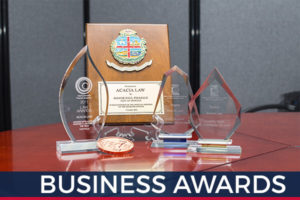 Acacia Law is proud to be declared a finalist in the local business awards (for businesses operating in Ipswich for less than two years). Although Acacia Law, Ipswich’s only patent attorney firm, has been around for over a decade, it is has recently moved to Ipswich.

At Acacia Law, we focus on building our clients’ businesses!

In The 2014 Ipswich Business Awards